The Brilliance of Beetles

The Brilliance of Beetles

Daisy is part of the Marketing and Communications team at Warwickshire Wildlife Trust!

One in five of all known species on Earth is a beetle – that’s over 400,000 different beetles in total. They range in size from the 16cm-long Amazonian titan beetle to the tiny feather-winged beetles, which measure 0.2mm and can comfortably sit on a pin-head! The ‘classic’ beetle has its front wings modified into hard, protective shields that cover the back and keep the more fragile flying wings safe when they’re folded away, although not all beetles are like this.

Over 4,000 species are known in the UK and they are a key part of our ecosystems, with both adults and larvae doing many different jobs. Like butterflies, they have a ‘complete metamorphosis’, in that the adult lays an egg, which hatches into a larva (or grub). The grub eats to grow, shedding its skin several times before turning into a pupa, which hatches into the adult beetle.

When beetles first hatch, their hard wing-covers are soft, so they are vulnerable. It takes time for them to dry and harden. Once a beetle has hatched it does not grow any more, so there is no such thing as a ‘baby‘ beetle – just big and small species. You can spot a newly-hatched ladybird as they are a pale-yellow colour. As they dry, they harden and develop the familiar red with black spots.

The benefits of beetles

Beetles occupy all sorts of niches and perform many important jobs. Green dock beetle larvae can be found in large numbers on dock plants, skeletonising the leaves and helping control the plant. Other species feed on leaves, flowers, seeds or roots.

Ladybirds are important predators of greenfly, helping keep them in check, and ground beetles eat huge numbers of invertebrates that like to feed on our crops and gardens plants. Our native glow-worm specialises in eating snails. It is also one of two species of beetle in Britain that can produce light (the other is the rare lesser glow worm). Females are completely wingless and have special organs that give out a chemical light to attract a mate. In warmer countries there are fireflies (which are beetles, not flies) and in Costa Rica I saw a glowing click-beetle bright enough for me to read by!

Beetles also recycle dung, dead wood and dead bodies. Dor beetles bury animal dung and lay their eggs on it. This helps get nutrients into the soil and gets rid of cow pats! In Australia, native dung beetles ignored the dung of imported cattle, so dung beetles from other countries were introduced and now help process over 30 million tonnes of cow-pats every year.

Sexton beetles smell out dead animals and dig beneath them to lay their eggs, slowly burying them, hence their alternative name of burying beetles. These beetles really stink, a result of their putrefying diet!

Beetles also form a major food source for many birds and mammals. Wading birds and starlings probe fields for cockchafer grubs living in the soil, whilst noctule bats get an important boost when the nocturnal adults emerge in May. Beetles are also a favourite food of hedgehogs. 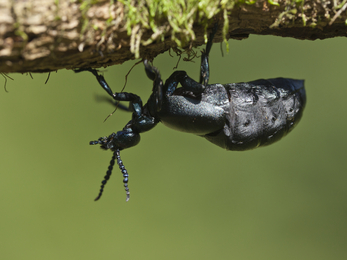 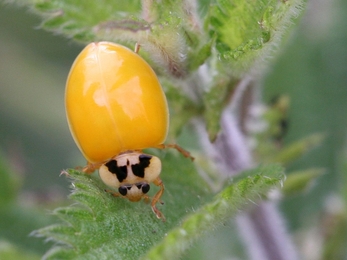 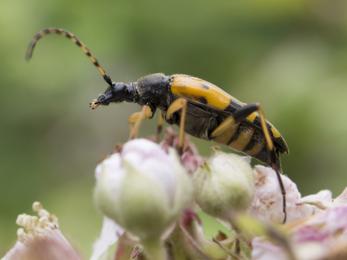 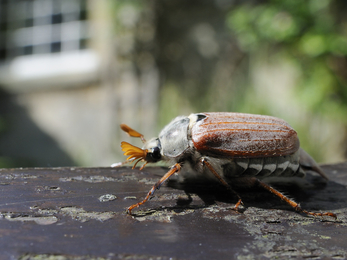 How do beetles avoid becoming a tasty snack? Many are camouflaged, others run, fly, burrow or jump to escape and a few, such as the screech beetle, can make a disconcerting hiss when caught. None can compete with the aptly-named bombardier beetle which has taken up chemical warfare. It ejects chemicals from a pair of glands on its rear which mix, react and turn into boiling hot irritant steam, enough to make any predator spit it out!

The oil beetle exudes toxic oily fluid from its leg joints if threatened, hence its name. It has an amazing life history; the female lays her eggs in soil and the tiny larvae climb up onto flowers. There they wait for a solitary bee to visit, then climb on-board and hitch a ride back to the bee’s burrow where they feed on provisions that the bee provides for its own grub – like an insect version of the cuckoo. The wasp-nest beetle does the same to wasps, laying eggs on bare wood so its larvae can climb onto wasps as they chew the wood to build their nests, gaining them entry to the wasp-nest.

Unfortunately, many beetles are under threat. Loss of wild habitats is having a big impact, as is the growing use of ever-more-toxic pesticides. Like all insects, they are an excellent indicator of the health of our world, and their decline is a warning.

Dung beetles, once widespread, have disappeared from some areas. Cattle kept indoors provide no cow-pats for dung-beetle food, and the liquid slurry sprayed over pasture is of little use to them. As if that were not bad enough, many farm animals are given anti-worm treatments that pass through and kill any beetle larvae in the dung.

Action for Insects is a national campaign to reverse the decline in beetles and other insects. It is essential so that future generations will have a chance to watch male stag beetles locking horns in a trial of strength, and gasp at the jewel-green rose chafer as it pollinates a pink dog rose.

Beetles are also the focus of the latest Wild About Gardens campaign, a partnership between The Wildlife Trusts and the RHS to help promote and preserve garden wildlife! You can find lots of tips for encouraging beetles at wildaboutgardens.org.uk

Foxes and autumnal sights: enjoy the latest photos sent in by readers of Nature News!

This Remember a Charity Week, will you protect wildlife on your doorstep?