Grey seals, Halichoerus grypus, are the larger of the two UK seal species, with the males weighing up to 300kg and females 200kg. Grey seal pups are usually weaned between 17 and 21 days, after gaining as much as 10kg a week feeding on their mothers’ milk, which contains around 50% fat and 12% protein. The weaned pups will live off this fat reserve while they learn to feed themselves, as unlike many other mammal species, their parents don’t teach them what to do! By this time, the pup will also have moulted its white pup fur to reveal its first-year pelage (the name for an animal’s coat of fur).

Grey seals are generally opportunistic feeders. Their diet varies geographically and seasonally, but sand eels and gadids such as cod, whiting and herring are the most important food sources for the UK population. There are three distinct populations of grey seals: in addition to the east Atlantic population, which includes the seals currently pupping around Skomer, the grey seal can also be found off the east coast of North America, from Labrador down to New England, and in another distinct population in the Baltic Sea. There are an estimated 300,000 grey seals globally; the UK population dropped to only 500 in the early 20th century, predominantly due to persecution, but there are now an estimated 120,000 grey seals in the UK – 40% of the global population!

Pupping on Skomer takes place between early August and late November, with the odd pup being born before or after this period. These are some of the earliest born grey seal pups in the UK; in Norfolk for comparison, most pups are born between November and January. As with grey seals in the rest of the UK, the population on Skomer is recovering from persecution. A detailed and systematic monitoring of the Skomer seal population began in 1983, which is also when the last annual cull of grey seals occurred, and since then the number of pups born on Skomer has increased from 65 to 238 pups in 2019. A further 170 were also born elsewhere within the Skomer Marine Conservation Zone on the nearby mainland coast last year. The survival rate of pups has been fairly stable since the end of the cull in 1983; 77% of the pups born on Skomer survived to weaning in 2019, which is only 1% less than the average.

Female grey seals can live as long as 35 years and males 25 years, so this results in lots of photos to check in the identification catalogues. It is very rewarding when you do match one and can learn about this individual’s history, for example, the oldest cow (adult female seal) that was identified in 2019 was first seen in 2002 and has been seen in all but three years since: interestingly 2019 was the first year she has been known to pup on Skomer.

In addition to being identified by their markings or scars (often from fishing gear), seals can also be identified via a tag placed on their hind flipper, such as red tag 80256 – an adult female also known as “Wombat”, who was seen around Skomer in 2019 and was released from North Devon after being rehabilitated by the RSPCA.

To gain even more information about seal movements, GPS units can be used. In 2019, monitoring by the Sea Mammal Research Unit for St Andrews University revealed that a bull (adult male seal), tagged on 15th April on Skomer, travelled as far north as the Skerries, off Anglesey. Seals that are part of Skomer’s identification catalogues are also sometimes identified elsewhere, such Cornwall or the Isle of Man.

On Skomer, the pups are also identified via a unique combination of colours sprayed onto their lower back, which enables us to follow them as individuals until they lose the colours after completing their first moult at around three weeks old.

From our distant monitoring points we are privileged to see some amazing sights, such as the birth of pups, two pups suckling from one female seal or a pup swimming. It is often thought that unmoulted grey seal pups do not, or rarely, swim, however it’s not uncommon for pups on Skomer. This is in part due to the beaches being fully submerged, particularly at spring high tides, forcing them into the water, however some are seen practicing swimming even when the beaches are not submerged. 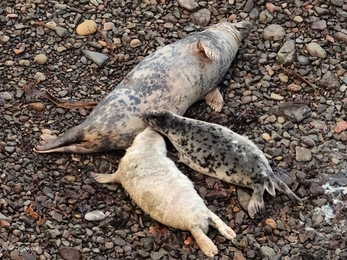 Two pups, one almost completely moulted the other still white, both being fed 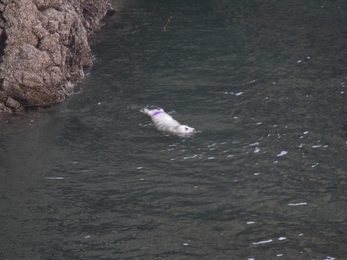 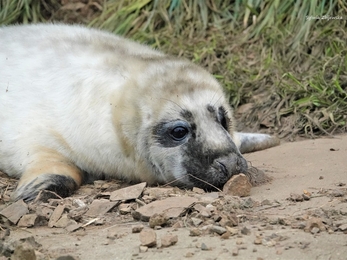 The 2020 seal pupping season is starting to wind down now on Skomer, with 231 pups born so far and a few more weeks remaining. We’re delighted to report that it’s been another good year for this fantastic species!

You can find out more about the island, including how to visit and see the seals and pups for yourself next year, at welshwildlife.org/skomer-skokholm/skomer/

A close-up of Warwickshire's insects: enjoy the latest photos sent in by readers of Nature News