A site for locals to enjoy a patch of nature with a good view of the Abbey across the River Anker.

Grendon Road (Inside a Council park)
Polesworth
B78 1HB

Next to the reserve off Grendon Road (B5000)

Here at Abbey Green you can try one of our interactive, measured mile trails! Get the kids out, active and enjoying nature. It's only one mile long with activities along the way, to keep your young ones running to the next post. “Flap your wings like a butterfly”, “hop like a frog” and “scurry like a beetle” along the route.

Funded by Public Health Warwickshire under the Green Spaces Fund, our measured mile trail is a great way to enjoy your local nature reserve.

Try our two other Measured Mile trails at Ashlawn Cutting in Rugby and Leam Valley in Leamington.

A number of footpaths also run through the reserve providing good access to and from the main park itself.

There are no gates and the majority of the reserve is wheelchair accessible as the paths are good.

Set within Abbey Green Park and linked to Queen Elizabeth II Playing Fields this reserve is close to the River Anker and was declared a Local Nature Reserve in 2013.   The reserve was opened after a partnership project with Warwickshire Wildlife Trust and Groundwork West Midlands, funded by Natural England. A habitat management plan by Warwickshire Wildlife Trust helps safeguard the habitats and species present.

Our nature reserve is within the park and is made up of a variety of habitats, set around a backwater channel of the River Anker. The channel is mainly swampy with patches of open water and stretches of scrub and tall herb vegetation.

To the east of the site there's an area of semi-improved grassland and plantation woodland. Grassland and scattered trees make up the rest of the site with footpaths weaving throughout leading to bridges over the backwater channel.

What can you do here?

What else is nearby?

The area of the park had been fields and grazing land with a farm building accessed via the bridge over the canal along the Grendon Road.

The extension of the Coventry Canal through Polesworth in 1790 and the development of steam power encouraged a steady growth in coal production in the area. By the 1840s, coal mining and other industries were firmly established in the village.

During the Second World War, opencast coal-mining scarred the surrounding countryside of Polesworth, and caused the river Anker to be diverted. Abbey Green Park was created after the land was open cast coal mined in the 1950’s and early 1960’s and the river now flows on its original course. 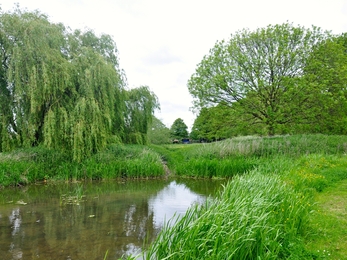 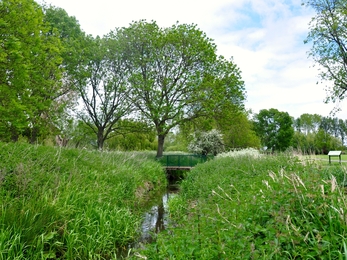 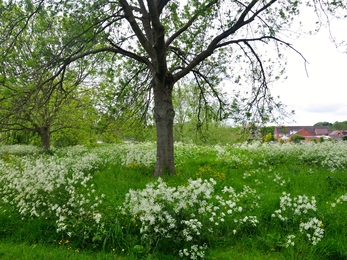 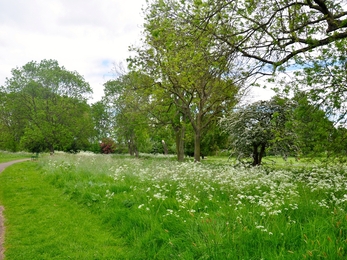 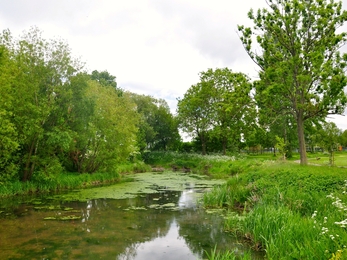