The last time I saw hedgehogs regularly was in the 1990s when walking home from the pub after closing time. We always used to see a hedgehog or two. No special effort required.

Fast-forward 20+ years and Debbie has warned that we’ll be out looking for hedgehogs in the hotel grounds and Coombe Country Park until at least 3am - and may not even see one.

With us are two volunteers, Jane and Nichola, and the four of us spread out evenly to survey a transect between the hotel and the main road, walking at a steady pace and sweeping the grassland beside the tree-lined driveway with our torches.

After nearly an hour with no hedgehog sightings, I joke that maybe I needed a pint of lager before setting out to help me get my eye in.

Then at 23:47 Jane spots a hog in the beam of her torch and it freezes in the light. This typical reaction is perfect for us to take a closer look but helps to explain why so many are killed on our roads. As we gather around, it curls up into a ball.

Wearing thick gardening gloves, Debbie gently jiggles our prickly friend to encourage it to uncurl and when the hedgehog gets back on its feet to regain its balance, is able to examine it.

She knows this particular hedgehog well. Five plastic tags are super-glued to its spines which tell us this is #W01 – the first to be identified and numbered when Debbie started tagging hedgehogs at Coombe in September 2018 to support her ongoing research.

#W01, an adult female, has now been found a total of 10 times and when we see her in mid-September 2019, she stands on the scales like a pro to be measured and weighed.

She’s a whopping 1151g, easily surpassing the 450g minimum believed necessary to withstand a winter of hibernation, and although Debbie removed three ticks at the start of September, none are found this time. Records completed, #W01 is released to continue her nocturnal activities.

Hedgehogs can cover considerable distances each night and over a mile is not uncommon. GPS grid references show that while this part of Coombe is #W01’s home, she does plenty of roaming across the grassland and woods looking for food – and it would seem for a mate. On one occasion she appeared to be pregnant and in May she was found courting.

As we press on with our torches, to the end of the driveway and back to the hotel, we find hedgehogs #W07 and #W17, the latter twice. We’re also excited to find two new faces who are duly measured, weighed, given a health check and tagged: #W29, #W30. 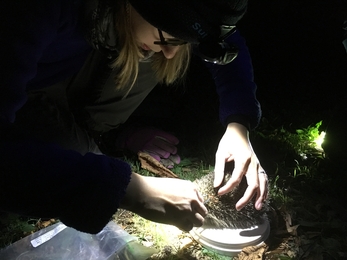 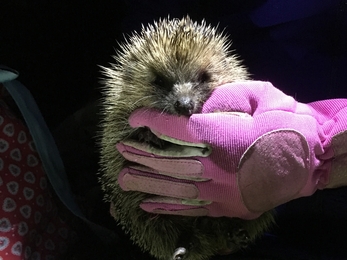 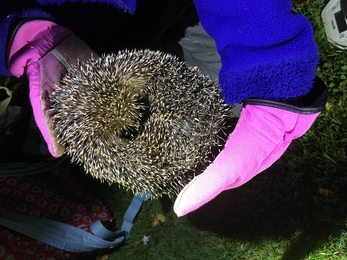 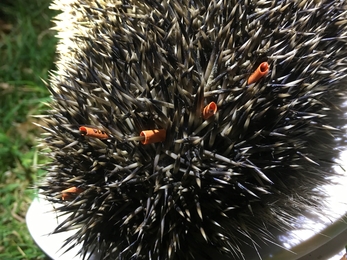 At 01.30 it’s time for a ‘lunch’ break in the car park, with our flasks of coffee and hot chocolate and the rhubarb muffins brought along by Nichola to share.

Jane tells me she much prefers this sort of ‘night out’ to going nightclubbing. It’s easy to see why. I’m finding it therapeutic after a hectic day at work. Peaceful but sociable and restful on the eyes; for me, it’s a welcome break from screens apart from the thermal imaging device we’ve now brought out to explore the hotel’s formal gardens.

There’s a whole new world to be discovered in the middle of the night. The eerie screeches and hoots of barn and tawny owls are magnificent as they echo around the open spaces. By the base of a tree, a wood mouse hops in and out of different holes, showing us his house. A fox is so intrigued by us that it doesn’t notice the rabbit hopping around just behind it.

During this second half we find more hedgehogs: #W14, #W24 and #W22; plus #W29 again, who is clearly very busy; and two more ‘newbies’, who are each painstakingly numbered spine by spine with five tags, #W31 and #W32.

We finish at 04.30 and back in the car park, Debbie declares it to have been a record-breaking torchlight survey for hog-spotting at Coombe.

In fact, at the conclusion of September 2019’s torchlight surveys, 17 hedgehogs in total were found over four nights at Coombe - double the number found in September 2018. Ten of these were encountered for the first time, of which eight were this year’s young.

Since 2000 it is estimated that urban hedgehog numbers have declined by 30% and rural hedgehogs by 50%. Debbie’s research, supported by the Trust’s dedicated volunteers, is a vital contribution towards monitoring these populations into the future.

Our autumn results are encouraging and Debbie is keen to share with us how the hotel and park support the surveys and try to manage their grounds sympathetically, including recently adding stickers to strimmers reminding staff to walk rough ground first to alert any hedgehogs in hiding.

I make a mental note to double-check that my own back garden is hedgehog-friendly: small changes like CD-sized holes in fences so hedgehogs can forage, a log pile home for tasty minibeasts and a wild corner for shelter, can all make a big difference.

And as I drive home in the dark, I also remind myself to be extra careful in case my headlights catch out a cute spiky mammal on its own nocturnal travels.

To discover more about how you can help hedgehogs, or support research by logging your own hog sightings, visit: www.helpforhedgehogs.co.uk.

A close-up of Warwickshire's insects: enjoy the latest photos sent in by readers of Nature News