On a cold and sunny Sunday in January, intrepid local divers from Marlin Subaqua Club kicked off their 2020 Midland Pools Project in the Blue Pool at our Bishop’s Hill Nature Reserve.

Blue Pool is part of Bishop's Hill nature reserve, near the village of Bishop's Itchington, and was once part of the old Harbury Cement Works which closed in 1970. It has since been established as an important local site for wildlife. The Trust took it over 18 months ago and is starting to control scrub on the grassland and clear up Blue Pool, aiming to create different habitats to attract more wildlife.

The day’s plan was to dive, survey and start to clean-up the former clay pit. Three club divers and three surface support completed two dives and a litter-pick. The divers recorded the water as 10.1 m deep, with a chilly water temperature of 6 °C. They found the lakebed covered by a layer of fine silt of at least 30cm deep above Blue Lias stone. Only a single perch was seen underwater, but more fish were seen breaking the surface. They also spotted zebra mussels which are an invasive non-native species.

Sadly there was plenty of litter spotted but they did a fantastic job of collecting it. Below the water were an old motorcycle and the remains of a pram. Other rubbish included drinks cans and bottles, plastic bags, disposable barbecues, clothing, shoes, a football, golf balls, clay pigeons and fishing line.

Marlin Subaqua Club hope to dive again later this year when the weather is warmer. Hopefully they’ll spot more wildlife then as the water warms up. They have kindly offered to remove more litter from the pool and may attempt to remove the motorbike.

This was an organised dive with trained divers who had our permission to enter Blue Pool and it is dangerous to enter the water.

Warwickshire Wildlife Trust has set up a new volunteer group on a Monday to help look after the nature reserve. If you’d like to come along and get hands on with nature get in touch by emailing volunteer@wkwt.org.uk. 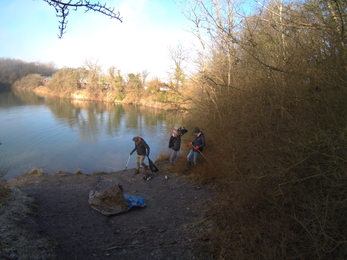 The Dasgupta Review: it's time to invest in nature

Today, we welcome the publication of the Dasgupta Review, an independent review on the economics of biodiversity. But what does it tell…